The public needs to hear the truth, and that’s why we’re here. The notorious fact checkers ‘Full Fact’, who are virtually fully funded by Facebook, recently released a fact checking article in which they concluded “the mRNA vaccines (Pfizer & Moderna Covid vaccines) have been tested for safety and effectiveness like any other vaccine”. Full Fact are lying to you.

We’re increasingly concerned that there is a lack of information available to the public that will allow them to make an informed decision about whether having the Covid vaccine is right for them. For example, one Doctor recently responded to an article in the BMJ, in which he described how he’d asked his own GP which Covid jab he was being offered, and his GP responded that he “thought they were all the same”. What hope have the public got of being reliably informed if the health professionals in charge of the vaccination roll-out don’t have the slightest clue themselves?

So we felt the perfect way to inform the public was to rip to shreds several points made by Full Fact in response to a Q&A fact sheet on the Covid vaccines that had been circulating on social media.

Full Fact said – “In the UK, two of the three approved Covid-19 vaccines , the Pfizer vaccine and the Moderna vaccine – use mRNA technology.  “

Where do we begin? We can confirm that none of the Covid-19 vaccines have actually been approved in the United Kingdom, they are in fact only temporarily authorised for emergency use only. In October the government made changes to the Human Medicines Regulations 2012 to allow the MHRA to grant temporary authorisation of a Covid-19 vaccine without needing to wait for the EMA.

A temporary use authorisation is valid for one year only and requires the pharmaceutical companies to complete specific obligations, such as ongoing or new studies. Once comprehensive data on the product have been obtained, standard marketing authorisation can be granted. This means that the manufacturer of the vaccine cannot be held liable for any injury or death that occurs due to their vaccine, unless it was due to a quality control issue.

Full Fact are also incorrect in saying that only two out of the three vaccines available in the United Kingdom use mRNA technology. The AstraZeneca vaccine does differ from the Pfizer and Moderna Vaccines but it still involves mRNA in the process of how it allegedly works.

The Pfizer and Moderna jabs allegedly work by delivering mRNA, which Pfizer and Moderna tell us is the genetic code for the spike protein found on the surface of the alleged SARS-CoV-2 virus, to a human cell inside a lipid membrane. Once the mRNA is inside the cell, the same machinery that is used to make our own proteins can make the spike protein. This then causes the immune system to act and initiate an immune response.

The genetic information inside a viral vectored vaccine like AstraZeneca’s is DNA rather than RNA. This DNA is a short linear piece of double stranded DNA which contains the viral genes along with the gene for the spike protein. The viral vector first infects the cell and then delivers this DNA to the cell nucleus. The cell can then transcribes the viral genes (DNA) into mRNA using the same RNA polymerase it uses for our own genes. After transcription, the mRNA gets tagged so it can leave the nucleus and be made into spike protein by the cell machinery.

Full Fact said – “Both mRNA Covid-19 vaccines have passed the same safety tests and procedures any other vaccine would.“

This is an outright lie. If this were true the Covid vaccines would be fully approved with marketing authorisation in the UK, and as we just explained above they’re not, and there’s a reason for it. None of the Covid jabs have concluded phase three trials.

The Pfizer phase three trial is not due to complete until April 6th 2023.

Whilst the AstraZeneca phase three trial is due to complete slightly earlier on February 14th 2023.

But what does this mean? Well 2023 at the time of writing is up to two years away. This means that the current worldwide Covid vaccine roll-out can be described as the largest human experiment ever conducted in history. Anybody who takes this vaccine, which is only temporarily authorised for emergency use is essentially a guinea pig, or a lab rat taking part in a trial.

Full Fact said – “There is no evidence that mRNA vaccines would impact fertility, but until more research is done to confirm they are safe for pregnant women, the NHS is currently recommending most pregnant women do not receive any Covid-19 vaccine. It says pregnant women with pre-existing conditions who might be at risk of developing severe complications should they contract the illness, and women who are at high risk of contracting the disease due to where they work, may still be able to get the vaccination. The reason why there has been concern is because the SARS-CoV-2 spike protein bears a slight resemblance to proteins in the placenta. The theory being that if the vaccine leads to the body producing antibodies which attack the virus, those antibodies might also attack the placenta. But as we’ve said the resemblance is only slight and realistically the body is not likely to confuse the two.“

Full Fact are quite correct in their statement regarding the spike protein used in the vaccines bearing resemblance to the proteins in the placenta. They are also quite correct that the vaccines are not officially recommended for use in pregnant women. But that’s only on paper, as in the real world, pregnant women – we suspect mainly healthcare workers – are being inoculated with one of the experimental Covid vaccines, and they are suffering for it. How do we know this? Because the UK Government release a weekly update on adverse reactions to the Covid Vaccines reported to the MHRA Yellow Card Scheme. Of which the latest update, containing reports made up to the 28th March 2021, shows that there have been 40 reports of miscarriage as an adverse reaction to the Pfizer vaccine, and 15 reports of miscarriage as an adverse reaction to the AstraZeneca vaccine.

Full Fact said – “Many people may experience side effects with Covid-19 vaccines but these are overwhelmingly mild and pass within a few days. No deaths have been directly attributed to Covid-19 vaccinations.”

They couldn’t be more wrong. As of the 28th March 2021 the MHRA have received a total number of 565,242 reported adverse reactions to the Covid vaccines, which include 11,914 Ear & Eye disorders such as deafness and blindness, 11,893 Heart disorders such as cardiac arrest, 17,860 Respiratory disorders, and a frightening 118,768 Nervous system disorders which include Bell’s palsy, seizure, paralysis, brain damage and several types of stroke. This accounts to a rate of 1 in every 166 people suffering a serious adverse reaction. There have also been 786 deaths reported to the MHRA as adverse reactions to the Covid vaccines as of the 28th March. The terrifying thing is that around only 1% of adverse reactions are actually reported, with many people not knowing the Yellow Card scheme even exists.

Full Fact said the “Covid-19 vaccines are not experimental and have been tested for safety and effectiveness like any other vaccine”… They’re lying to you. 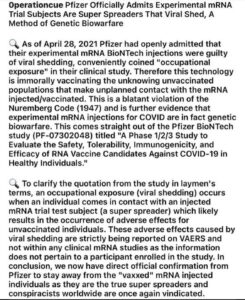