As reports of engineered food shortages multiply, here is a recommendation from a corespondent
about how you can make sure you have nutritious food to eat even when the shops are empty.
Stock up now! (PDF attached)

It all started last winter
(2019-2020), when we watched a 1934 movie directed by Frank Capra called
‘Broadway Bill’, featuring Myrna Loy and Warner Baxter, whose bank-roll is thin
and the luck is against him as he is arrested because of $150 he owes somebody
for horse food … We really enjoyed watching this nice old movie: https://www.youtube.com/watch?v=9lEfBSWPKVA

It was well worth the entertainment,
as well as the thoughts; I heard the song ‘Split-Pea Soup and Succotash’
(uncredited / composer unknown) and later found out that ‘succotash’ was highly
popular in the US during the Great Depression, the time at which the movie was
made, because of its affordable ingredients (mostly beans, corn and other
vegetables) and filling nature: “Oh – the Split-Pea Soup and the
Succotash fell in love one spring and summer…” It’s not much of a
song, but you can listen to some lyrics at 46’20” or 1h 07’00 of the
video.

I then thought about ‘the
Split-Pea Soup’ and here’s all I discovered about DRIED GREEN SPLIT PEAS:

They are a precious product due
to their very interesting nutritional properties and deserve a place of choice
in the diet of the whole family. It is the seed of Pisum sativum, from the
Fabaceae family. They are obtained after complete maturity, then dried so that
the grain has only 9% moisture. The cellulose husk that envelops this legume is
then removed.

They can be green or yellow, but
people are more used to green ones, which are bright green due to chlorophyll
and possess a more robust taste than yellow split peas.

– as well as group B vitamins
such as B9 (folate), B6 (pyridoxine), B5 (which corresponds to pantothenic
acid), B3 (niacin), B2 (riboflavin), B1 (thiamine), all necessary for DNA
synthesis in the cell.

This powerful combination of
vitamins mean that there are lots of health benefits. According to the USDA
Agricultural Research Service, there is 60 g of carbs in one serving size of
dried peas. Besides, amino acids that they contain are very similar in their
properties to animal proteins. Thereby, this is significant for vegetarians who
may consume dried peas instead of meat… or when meat is scarce! Due to a high
number of antioxidants such as lutein, carotene, rich in vitamin A, dried peas
protect the skin and keep your eyes healthy and sharp.

Split peas are nourishing: it
gives a feeling of satiety that allows overweight people with big appetites to
reduce their daily portion;

it participates in blood
clotting;

it helps fighting colon cancer
(as part of a healthy lifestyle);

They can be consumed regularly by
most people, including diabetics. They do not contain gluten and can therefore
be eaten without fear by people who are celiac, allergic or hypersensitive to
gluten.

They are perfectly compatible
with various spices that are also full of virtues for the body, such as
turmeric combined with black pepper, or cumin, as is done in India.

Like the ugly duckling, split pea
soup soup has its beautiful side, but you have to taste it (it is tasty, sweet
and starchy) to make that discovery! You’d need a pressure cooker if possible
(it cooks in 35 mn, instead of 150 mn) 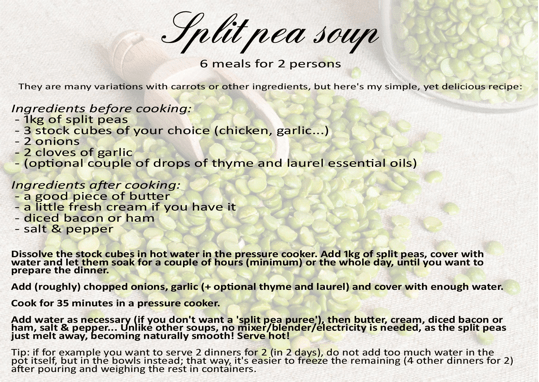 I suggest you buy 1kg as soon as
possible to try it.

Of course, you would need to get
the few extra ingredients, but this is the basis.

They will keep for 30-40 years in
Mylar bags with oxygen absorbers (I can give you a whole course about that
later).

No wonder poor Americans loved it
during times of hardship! Unlike rice or pasta, no need for sauce to go with it.
That’s the beauty of it! … And we always feel like singing from the movie
when we’re having it!