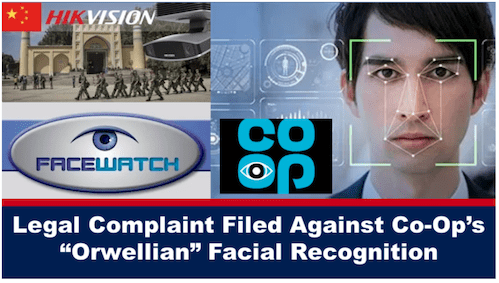 A major UK supermarket has rolled out facial recognition software in its stores, the same Chinese software used in Chinese concentration camps, so that they can blacklist any shoppers they don’t like the look of.  Would those be the ones not obediently using the self-checkouts and still preferring the checkouts operated by humans?  Or would it be the ones still refusing to give up the use of cash because they want to keep their anonymity and not be banned from eating meat or chocolate?  I don’t suppose it will put the jabbed morons out one jot, though.  They’ll probably be led to believe this intrusion into their civil liberties will “protect” them from the unjabbed or some other invented threat. One step close to the concentration camps, which already exist, let’s remember, and are just waiting to be populated with the dissenters.  If you are still using the Co-Op, you are a traitor to the human race.
Excerpts
Southern Co-operative supermarkets use facial recognition software with surveillance cameras from Chinese state-owned firm Hikvision, which also provides cameras for the CCP’s concentration camps in Xinjiang and has been associated with serious security flaws. The firm is banned from operating in the US and a group of senior parliamentarians recently urged the Government to ban the cameras from the UK.
…
Big Brother Watch’s legal complaint filed in July 2022 outlines how the Co-op’s system, sold by Facewatch, “uses novel technology and highly invasive processing of personal data, creating a biometric profile of every visitor to stores where its cameras are installed.” The supermarket chain has installed the controversial surveillance technology in 35 stores across Portsmouth, Bournemouth, Bristol, Brighton and Hove, Chichester, Southampton, and London.
…

The facial recognition software used with the cameras, provided by UK firm Facewatch, can be used to share biometric photos of “subjects of interest” with other companies that buy access to their system. Shoppers’ photos can be shared within an 8-mile radius from where they are taken from stores in London, or up to a 46-mile radius in rural locations.

Being on the watchlist for one of Facewatch’s clients like the Southern Co-operative could have serious detrimental impacts on someone’s day-to-day life. Big Brother Watch is urging anyone who thinks they might have been affected by this to reach out to them, as they may be able to challenge their inclusion on the watchlist.